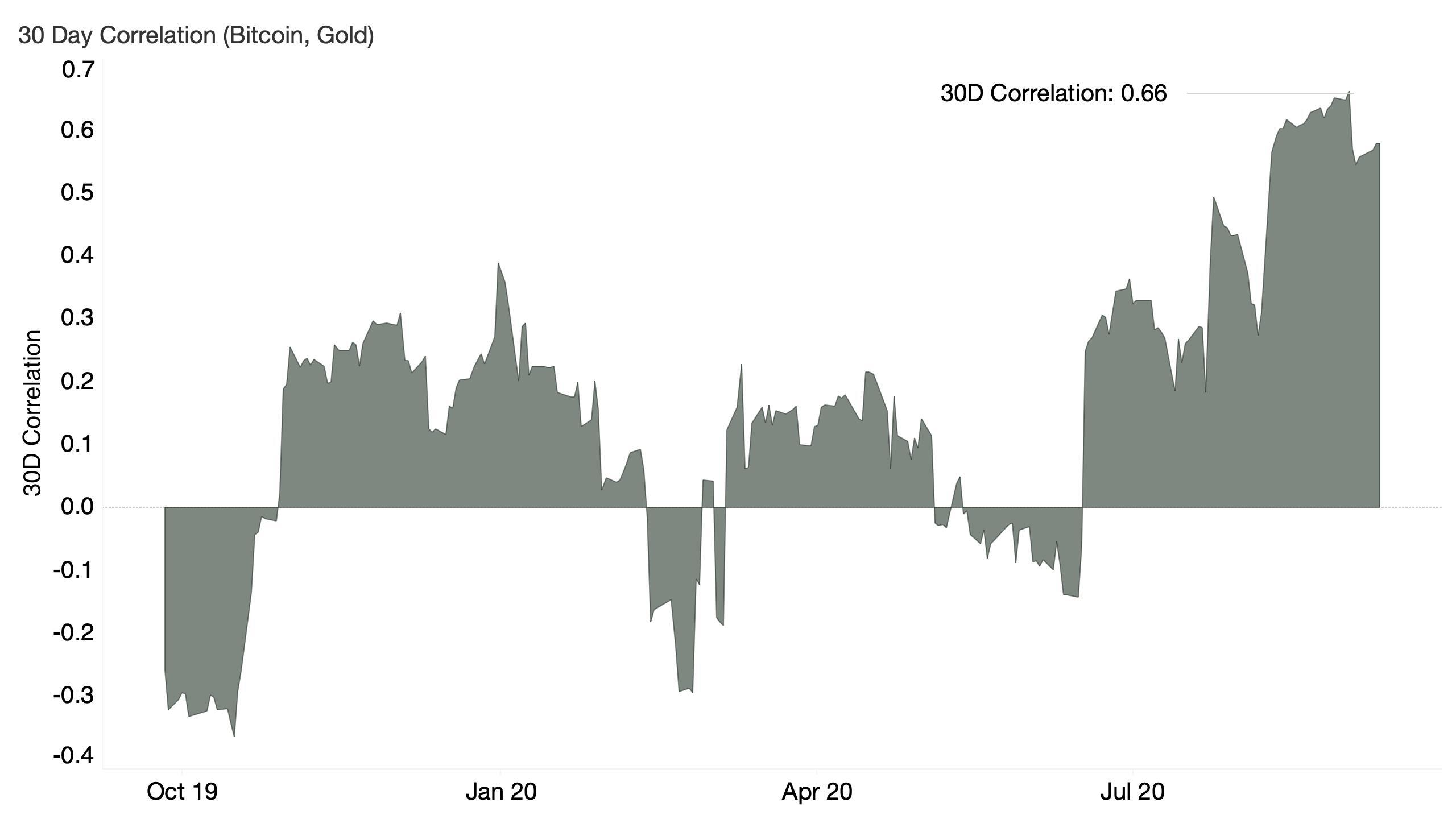 Market pundits often comment on the volatility of the digital currency space, and more recently on its correlation with traditional markets as a critique of its usefulness or whether or not it is fulfilling its “potential”. This style of commentary was more pronounced during the peak of the market drawdown in March where many pointed to the drawdown in Bitcoin’s price as a counterargument to Bitcoin as a “safe haven asset”. Even outside of extreme market movements, price and volatility are a focal point of many crypto market pieces and discussion. Much of this analysis often lacks depth, either intentionally to create clickbait, or unknowingly lacks perspective and fails to provide more balanced observations that account for the different drivers of volatility. While it could make sense for active traders to look at short term correlations and market microstructure as a source of alpha, looking at these data points (especially in isolation) as a fundamental argument as to what Bitcoin is and will become is myopic. We had drafted this piece in April, in direct response to some of the misinformed pieces we were reading, but in the spirit of the topic itself decided it would be best to give it the benefit of time. Short term observations should not act as the basis for forming a long term investment thesis, which requires a longer time frame and broader mental model.

Short Term Volatility and Correlations are Driven by Liquidity, not Fundamentals

Short term volatility and correlations are driven by liquidity and asset flows, not fundamentals. While this is true for both crypto and traditional assets, it is especially pronounced for digital assets given the relative size (small), leverage (high), and liquidity (moderate) of the market. Using short term volatility measures and correlations as supporting evidence against (or for) the case for Bitcoin is myopic and demonstrates a lack of understanding of what drives short term price movements.

“Much to the disappointment of true believers, however, Bitcoin—in fact, the whole cryptocurrency market—has cratered right along with the stock market…. So is Bitcoin not actually a safe haven after all? Though it appears to have failed the biggest test of the idea yet, the debate will probably rage on, serving as a reminder that we are still figuring out exactly what Bitcoin is and is not… Gold is also famously seen as a “safe haven” asset, which Investopedia defines as “an investment that is expected to retain or increase in value during times of market turbulence.” Other commodities like silver, corn, and livestock can also be safe havens. So are US Treasury bonds and cash. Many Bitcoin advocates have claimed that the digital asset belongs in this league too. Then last week happened.” -MIT's Chain Letter 3/13/2020

This passage lacks both a consistent timeframe for analysis and intellectual honesty. The narrative of Bitcoin as a store of value and its relation to Gold and to other “safe haven” assets is being evaluated over an extremely short period of time without discussion of the asset classes it’s being compared to or the crypto-centric catalysts that occurred during this period.

Starting with the former, what this article failed to observe is how the “traditional” safe haven assets performed over the same period. The worst week for Bitcoin during the broader correction was the week ending March 13th. During this week (Friday to Friday), BTC dropped 39.01%. On a volatility adjusted basis, this was in line with GLD and SPY. It’s also important to note that all of the “traditional” safe haven assets lost value in the same week with gold dropping -9.06%, long dated government bonds -7.69%, and inflation protected bonds dropped -6.87%. The only asset that increased in value was DXY, which represents the US Dollars value vs a basket of developed market currencies1.

During that same period, there were several assets that were trading opposite their “fundamental” value as the result of leverage and subsequent margin calls that ensued given the re-rating of asset valuations lower. Leverage and overall market positioning are the primary driver of short term performance during periods of market stress. Once there is sufficient deleveraging, then the longer term correlations and the associated “fundamental drivers” will resume.

With respect to the latter, here is a quick summary of the market setup for crypto centric drivers that drove/accentuated sell off and subsequent delivering that took place in March:

This impact of liquidity and leverage is even more pronounced on the crypto market given both the relative size (smaller), the amount of leverage allotted to investors (higher), and the sophistication of investors (lower).

So the summary in the MIT Chain Letter, the sentiment of which was echoed by many publications, both ignored how other “safe haven” assets performed and also ignored crypto-centric drivers that exacerbated volatility over this period.

While some crypto experts seemed initially surprised by this, Coinbase later published a thoughtful piece that did provide good context for the leverage that was built up in the system and the resulting impact on short term price as well as the buyer behavior on their exchange in the period immediately following the crash. Likewise, Fred Wilson of USV also published a piece that provided a similar narrative. Both pieces do a relatively good job of explaining the ephemeral nature of a liquidity crunch and the decoupling from “fundamentals” that occurs during such periods.

At the other end of the spectrum, Bitcoin continues to be “institutionalized” - this Bloomberg Intelligence quote puts Bitcoin on common ground with traditional “safe-havens” and also directly highlights the drop related to margin-calls (leverage)

In an enduring zero-rate, deflationary environment with unprecedented monetary stimulus, gold, Bitcoin and U.S. Treasury bond prices will accelerate pre-existing uptrends, in our view. Dips in the quasi-currencies related to margin calls in other markets appear to be mostly complete, with strengthening foundations for price appreciation. -Bloomberg Intelligence 03/24/20

Year to date (through Aug 31st), Bitcoin and the other “safe-haven” assets are the top performing assets and longer term correlations indicate that BTC is more aligned with GLD and TIP than it is with risk assets. The 30 day rolling correlation between gold and Bitcoin front month futures is also at .66, the highest level it’s been the entire year.

While beyond the scope of this piece, it’s also worth noting that while we’ve yet to see inflation manifest in significant levels (as measured by CPI) we are seeing dollar devaluation (-4.53% YTD) reflect the impact of the expansion in the monetary base, which all else equal should be good for fixed-supply assets.

Our investment thesis in Bitcoin and the broader digital currency market can be thought of as having two distinct, yet complementary horizons:

As a general rule of thumb, investors shouldn’t concern themselves with the volatility of the asset class (especially over short horizons) or its short term correlations with other assets as an input into a long term investment thesis. As we’ve seen, similar to other asset classes - short term liquidity needs are often the largest driver of volatility and can result in a decoupling of assets from their long term value.

The Narrative of Bitcoin has Preceded The Reality

While I’m a general believer in Bitcoin’s ability to function as a superior version of gold, given its portability, growing ease of custody (self or with a third party), divisibility, and the fact that it is digitally native, the narrative of Bitcoin has preceded the reality - specifically as a replacement/compliment to gold for institutional investors and by extension as a safe haven asset.

Over the last several years, many investment firms bullish on the prospects of Bitcoin and digital assets have suggested that a specific allocation to Bitcoin is prudent, providing a hypothetical analysis that had you invested 1% of “plan assets” (referring to pension funds & endowments) then your overall return would have increased by X% and Sharpe Ratio by Y%. While an interesting hypothetical exercise, this is largely a moot point as the asset class was not ready for institutional investment until recently. The market was too small, regulated derivatives were non-existent, qualified custody was a barrier, and there were many regulatory overhangs. Furthermore, the “safe-haven” narrative also requires institutional ownership to reinforce the behavior that we expect. While this clearly presents a chicken and egg problem, part of what is lacking for Bitcoin is the “reflexive” behavior and market expectations of how bitcoin SHOULD perform during a market dislocation. As we saw this year (and during the GFC), all assets can be adversely affected during a liquidity crunch, but the behavior we expect (and increasingly so for Bitcoin) tends to materialize over medium and longer term horizons.

More recently, the necessary infrastructure has come online, the availability and volume of regulated derivatives is growing, and the necessary regulatory clarity (especially for Bitcoin) has been given to banks, who are now allowed to provide custody services for crypto assets. This is coming at a time when the institutional narrative is strengthening.

Paul Tudor Jones recently added credibility to Bitcoin (in the context of institutional investment) in a letter to investors he published in May titled, “The Great Monetary Inflation”. While this view has been long held by many Bitcoin investors and supporters, the importance here is not the message but the messenger. While this has already been largely discussed, with several media outlets quickly picking up the story, I think it’s worth revisiting. He provides a strong case for Bitcoin in the context of other monetary assets, and states:

“The best profit-maximizing strategy is to own the fastest horse… If I’m forced to forecast, my bet is it will be Bitcoin.” -Paul Tudor Jones

Despite his well-thought-out thesis and view that Bitcoin is likely to be the “fastest” horse, he goes on to state that the fund will have “Initial maximum exposure of low single digits”. This gives you a sense of how small the institutional ownership of crypto is relative to other assets (chicken and egg).

Looking at this from another perspective, here is the size of the Bitcoin market at the time of this writing:

As PTJ points out in his piece (table below)7, the size of the Bitcoin market is tiny in comparison to gold and traditional financial assets. As of today, BTC is still only ~2% the size of the Gold market.

The relative size of the market and the explicit limits put on the size of an allocation by an institutional investor both illustrate that institutional capital has yet to fully “arrive”. Given the strengthening narrative, the availability of custody, and improved regulatory clarity, there is now a very viable path for institutional investment.

Looking ahead to the next inevitable market sell-off, we expect that Bitcoin will continue to trade in line with risk assets in the short term, weighed down by positioning and crypto-centric liquidity drivers similar to its behavior in March, although likely with less extreme correlation. While I believe it will slowly become more resilient, dollar liquidity remains the only true (current) short term safe haven asset in the context of traditional assets and Bitcoin alike. Many crypto assets, especially those that are seeking to function as a “base money”, are dependent on reflexivity (while beyond the scope of this piece, many of the crypto economic models that underpin “DeFi” are dependent on reflexivity). The most important element of the digital gold narrative is that Bitcoin can borrow/adopt the reflexivity that underpins the fundamental and institutional investment case for Gold. With continued growth in the size of the market and increased institutional participation, there will be growing reflexivity to rotate to Bitcoin similar to gold during times of market stress.