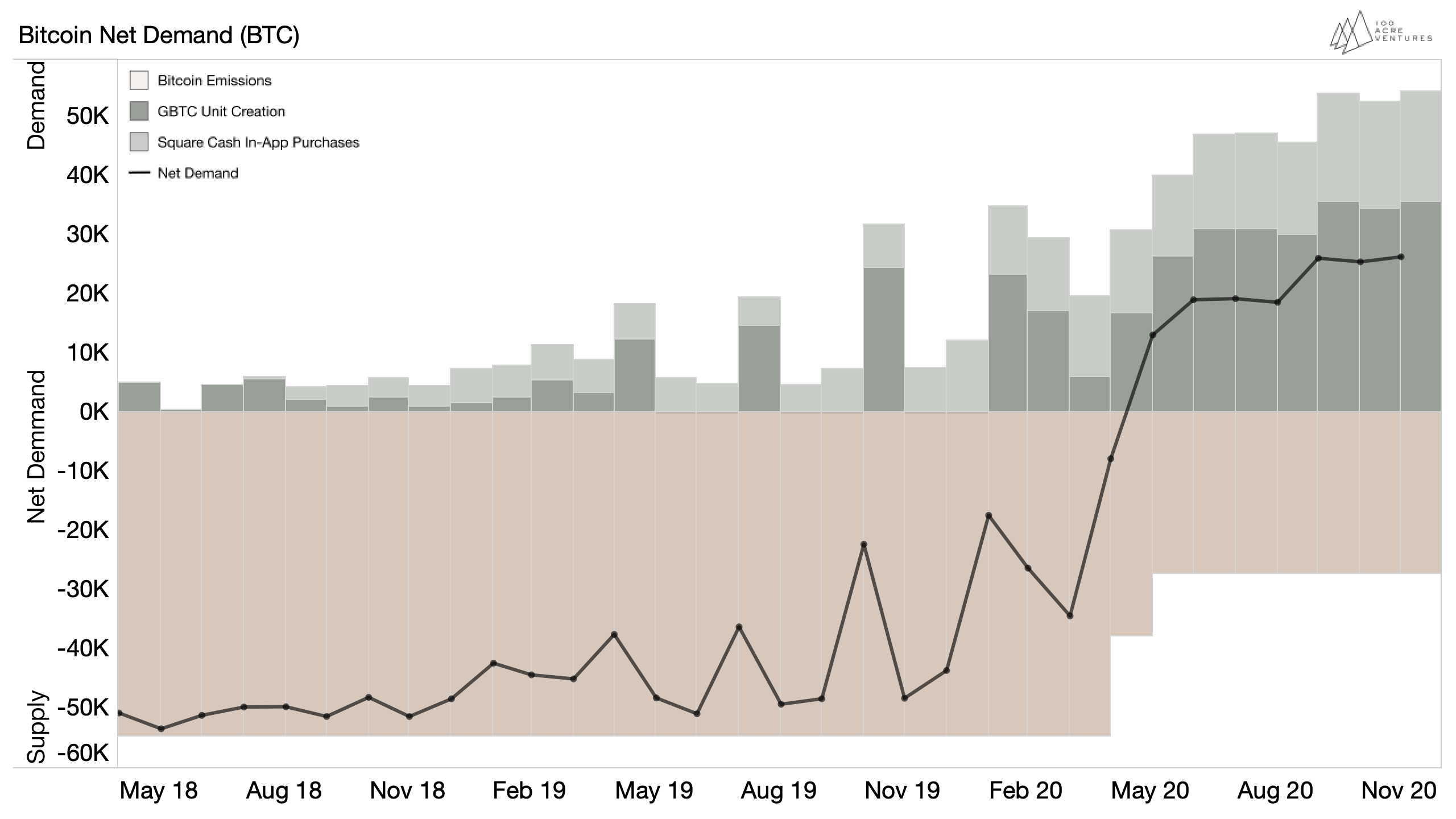 Hiding in Plain Sight: Bitcoin Demand on the Rise

Bitcoin demand is on the rise at a point in time when awareness, accessibility, and consumer purchases by mainstream consumers are accelerating. A key difference this time between the euphoria that fueled the blow off top in late 2017 is the narrative that is driving renewed interest in Bitcoin and bringing more traditional investors into the fold.

There was a lot of discussion about the Bitcoin halving at the start of the year. Many people speculated that it would drive the price of Bitcoin higher, as if the reduction in future emissions (new Bitcoin produced via block rewards) should mechanically adjust the price of Bitcoin today. Most of the discussion on the topic omitted a critical and more important part of the equation: demand.

If you googled “Bitcoin Halving” in the days leading up to the block reward adjustment (Block 630,000 on May 11th), among the top hits (the top hit for my search) was a Coindesk article titled “Bitcoin Price May Drop After Halving Historical Data Shows”. The article cites various pundits who looked at price behavior following previous previous halvings (the two that have occurred) as an indicator of what to expect in the future. There was a comment that scarcity is increasing as the result of the halving (not really, Bitcoin scarcity is the same as it was yesterday, and it will be less scarce tomorrow technically speaking), but deceleration of future inflation or the “guarantee” of future scarcity remains. There was also a comment that given that the halving has been talked about for some time and is known in advance, it is already priced into the market. We believe that the price of Bitcoin, in its current state, is largely a function of market positioning, liquidity, and capital flows. In its current state and in the context of the “digital gold” narrative, it does not have “fundamental value” in the strict sense that there is no specific reason that BTC should be $X dollars today or $Y dollars tomorrow. While I’m a general believer in efficient markets, a basic assumption of the efficient market hypothesis is market participants have perfect information. We think there is a case to be made that market participants are acting with less than perfect information or at least not accounting for current and future levels of demand.

To illustrate this, we provide a simple model to evaluate supply/demand for Bitcoin currently. There are a growing number of ways to purchase, trade, and speculate on the future price of Bitcoin. Some however, are more geared towards or  better suited for long term ownership vs. short term speculation. For purpose of discussion, we’re going to focus on two:

Why are we focusing on these two?

In addition to being more oriented towards purchasing to hold vs. actively trade, they are both easy to access and easy to use. Over the last couple of years, we’ve seen tremendous growth in the use of both of these venues for the purchase of Bitcoin and unlike many venues, they report figures on unit creation and transaction volume. Here is the growth by the numbers:

Now let’s go through a simple thought exercise and put these demand numbers in the context of current daily emissions and emissions post halving.

If you assume unit creation of GBTC and square cash in-app purchases continued at a 15% q/q growth respectively from Q2 2020 forward* (well below the level each are both tracking) and you assume for a moment that all in app square transactions are purchases (in reality, this is a gross tx number so it accounts for both in app purchases and sales) then net demand, defined as [GBTC unit creation + square cash app purchases - bitcoin emissions], turns positive (demand exceeds emissions) between the third and fourth week of May 2020 (this week).

Given that we know that all transactions in Square are not buy and hold purchases, let’s assume that the ratio of purchase to sales within the square cash app is ⅔ purchases and ⅓ sales (so net ⅓ purchases). Let’s also assume that only 50% of GBTC unit creation is for buy and hold purposes. Under these assumptions, net demand turns positive in Q1 2021.

Clearly this analysis is dependent on several assumptions, namely the percentage of purchases on these respective venues that is intended for longer term buy and hold as well as the future growth rate on each venue which was set to 15%. It should be noted though, that 15% growth is well below the current pace of growth observed for both GBTC and Square Cash and that this doesn’t account for several other sources of demand. There are a growing number of consumer apps that enable purchasing of BTC with more of a focus on long term buy and hold. Platforms such as Swan Bitcoin promote weekly purchases of BTC and enable seamless onboarding to a qualified custodian to facilitate long term storage, Coinshare’s XBT Tracker is similar to GBTC (in terms of investor focus) with a larger investor base in Europe, and there are a growing number of ETP products becoming available in Switzerland. Groups like Swan Bitcoin, Kingdom Trust, and others are also focused on enabling BTC purchases in retirement accounts which clearly have a bent towards long term buy and hold ownership.

We are observing an increase in the demand for Bitcoin across several venues that are more geared towards longer term ownership vs. short term speculation. Setting expectations around Bitcoin price based on previous halvings does not provide appropriate context. The 2020 halving is of particular relevance as it occurred during a time where demand is accelerating on a strengthening narrative. The “why” people are buying Bitcoin is equally or more an import to the observation that they are. Institutional and individual investor concern about the ramifications of current monetary policy as a motivation to learn about and invest in Bitcoin is powerful. This is providing a tailwind to the “digital gold” narrative and brings Bitcoin into the discussion alongside gold as a hedge to future expansion of the monetary base and general macro uncertainty. There are lots of ways we can critique this analysis (my own critiques below) but regardless of your assumptions you arrive at a similar conclusion: net demand will turn positive if purchases continue at the current pace.

Counterpoint: 15% is roughly the average for Square Cash in-app purchase (17.72%) and GBTC Unit Creation (13.6%) over the last two quarters (Q4 2019 & Q1 2020). This also represents a period where unit creation for GBTC started to become available daily (vs. in discrete windows)

Critique: The current increase in purchases was in anticipation of the halving and thus growth rates will slow down post halving

Counterpoint: This is possible and we’ll continue to monitor the data. We chose GBTC and Square Cash as proxies for demand in part because they’re better suited for buy and hold vs. trading (although this is an assumption). Post halving, we have not observed any slowing of GBTC unit creation and new unit creation still requires a 6mo lock

Counterpoint: New unit creation (creating units at NAV) requires a 6mo lock, so you are forced to take price risk. Given GBTC trades at a premium, there is a pure arbitrage opportunity for those who borrow BTC and contribute in kind to create new units (payout = borrow cost less GBTC premium to NAV at expiration). While it is true that some unit creation is attributable to this trade, it is not riskless if premium at expiration is less than borrow cost, so this requires a view/willingness to take risk that future demand outstrips current supply of GBTC resulting in a future positive premium to NAV. This trade is also limited to more sophisticated investors given size and structure requirements. We’re also assuming future unit creation to be 15% which  is well under the current pace. Charles Swhwab highlighted that GBTC is a top holding w/in millennial 401ks. This is not generally reflective of short term speculation.

Critique: Bitcoin price is less now than it was previously, so demand is not as high in dollar terms.