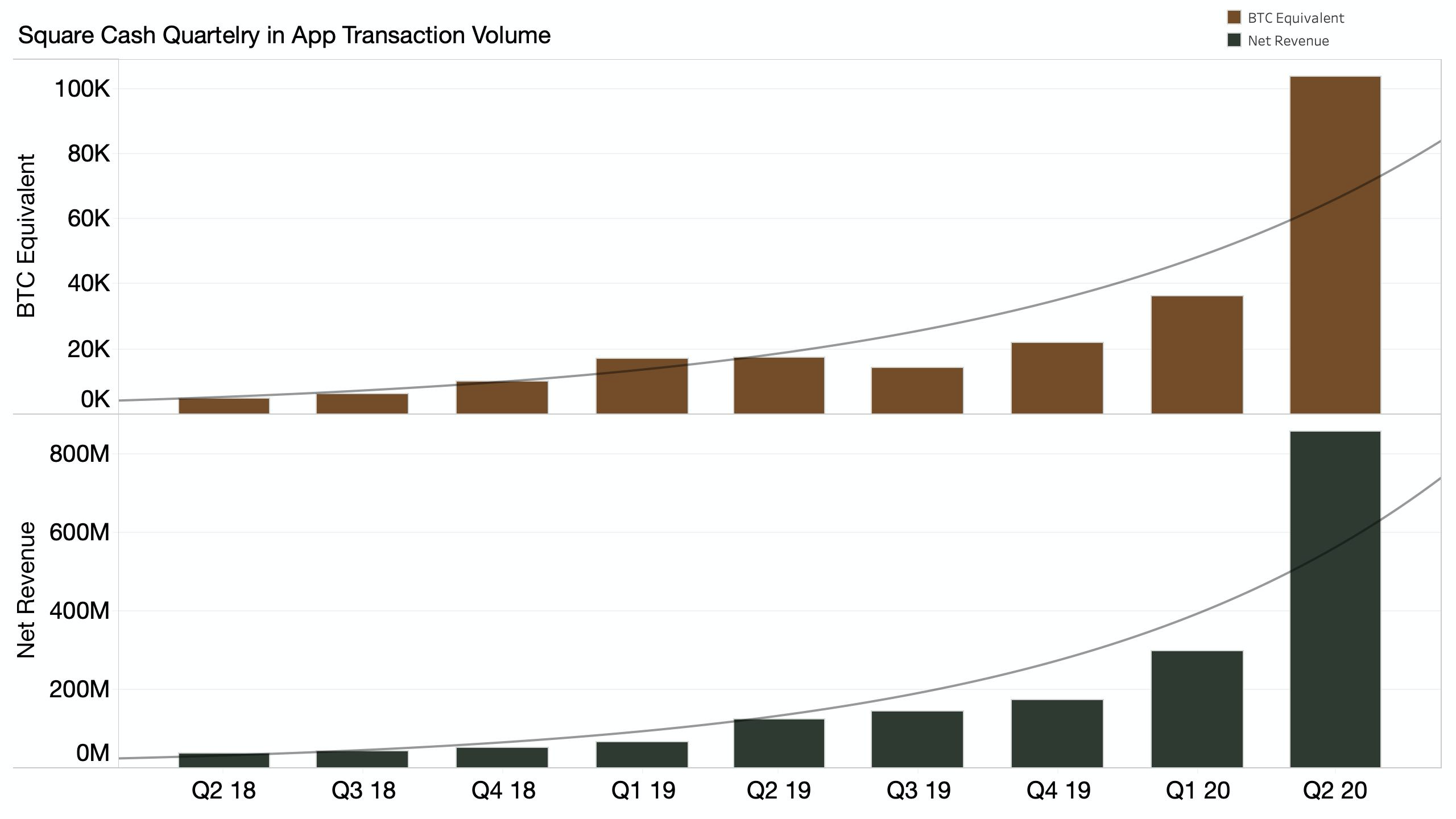 In the first installment of “Hiding in Plain Sight”, we prompted the discussion with the following overview:

To evaluate growing consumer demand, we focused on two onramps that are more geared towards or better suited for long term ownership vs. short term speculation:

We focused on these two given the general size, accessibility, and long term oriented nature of each of them (a more formal debate on this is provided in the Critiques & Counterpoints section at the conclusion). To help illustrate growth - we’re providing size/growth figures at the time of the original publication (May 20th) and today (Aug 5th)

In addition to being more oriented towards purchasing to hold vs. actively trade, they are both easy to access and easy to use. Over the last couple of years, we’ve seen tremendous growth in the use of both of these venues for the purchase of Bitcoin and unlike many venues, they report figures on unit creation and transaction volume.

Below are the growth by the numbers - with most recent growth statistics highlighted (Q2 2020) in bold:

Let’s revisit the simple thought exercise from our first installment and put these demand numbers in the context of daily emissions post halving.

If you had assumed unit creation of GBTC and square cash in-app purchases continued at a 15% q/q growth respectively from Q2 2020 forward (well below the level each are both tracking) and you assumed for a moment that all in app square transactions are purchases (in reality, this is a gross tx number so it accounts for both in app purchases and sales) then net demand, defined as [GBTC unit creation + square cash app purchases - bitcoin emissions], the net demand turned positive (net demand exceeds emissions) between the third and fourth week of May 2020. With the benefit of hindsight, now that we know the true growth in Square Cash app transactions was 187% in Q2 (vs. the 15% originally used as in the previous estimate), we see that net demand turned positive (with the same set of assumptions) in April 2020

Given that we know that all transactions in Square are not buy and hold purchases, let’s assume that the ratio of purchase to sales within the square cash app is ⅔ purchases and ⅓ sales (so net ⅓ purchases). Let’s also assume that only 50% of GBTC unit creation is for buy and hold purposes. Under these assumptions - again now knowing the Q2 2020 square cash purchases as well as GBTC unit creation to date - net demand turns positive in Aug of 2020 (vs. Q1 of 2021 previously estimated).
‍

Clearly this analysis is dependent on several assumptions, namely the percentage of purchases on these respective venues that is intended for longer term buy and hold as well as the future growth rate on each venue which was set to 15%. It should be noted though, that 15% growth is well below the current pace for growth observed for both GBTC and Square Cash and that this doesn’t account for several other sources of demand. There are a growing number of consumer apps that enable purchasing of BTC with more of a focus on long term buy and hold. Platforms such as Swan Bitcoin promote weekly purchases of BTC and enable seamless onboarding to a qualified custodian to facilitate long term storage, Coinshare’s XBT Tracker is similar to GBTC (in terms of investor focus) with a larger investor base in Europe, and there are a growing number of ETP products becoming available in Switzerland like those from 21shares. Groups like Swan Bitcoin, Kingdom Trust, and others are also focused on enabling BTC purchases in retirement accounts which clearly have a bent towards long term buy and hold ownership. Furthermore, since our first installment, the OCC has come out with guidance that banks may provide custody services for crypto assets which was previously a larger overhang and source of regulatory ambiguity.

We continue to observe an increase in the demand for Bitcoin across several venues that are more geared towards longer term ownership vs. short term speculation. The increase in demand we’re seeing is accelerating on a strengthening narrative. The “why” people are buying Bitcoin is equally or more an import to the observation that they are. Institutional and individual investor concern about the ramifications of current monetary policy as a motivation to learn about and invest in Bitcoin is powerful. Paul Tudor Jones added credibility to Bitcoin (in the context of institutional investment) in a letter to investors he published in May titled “The Great Monetary Inflation”. This is providing a tailwind to the “digital gold” narrative and brings Bitcoin into the discussion alongside gold as a hedge to future expansion of the monetary base and general macro uncertainty. There are lots of ways we can critique this analysis (my own critiques below) but regardless of your assumptions you arrive at a similar conclusion that net demand will turn positive if purchases continue at the current pace.

Counterpoint: 15% is roughly the average for Square Cash in-app purchase (17.72%) and GBTC Unit Creation (13.6%) over the last two quarters (Q4 2019 & Q1 2020). This also represents a period where unit creation for GBTC started to become available daily (vs. in discrete windows)

Critique: The current increase in purchases was in anticipation of the halving and thus growth rates will slow down post halving

Counterpoint: This is possible and we’ll continue to monitor the data. We chose GBTC and Square Cash as proxies for demand in part because they’re better suited for buy and hold vs. trading (although this is an assumption). Post halving, we have not observed any slowing of GBTC unit creation and new unit creation still requires a 6mo lock

Counterpoint: New unit creation (creating units at NAV) requires a 6mo lock, so you are forced to take price risk. Given GBTC trades at a premium, there is a pure arbitrage opportunity for those who borrow BTC and contribute in kind to create new units (payout = borrow cost less GBTC premium to NAV at expiration). While it is true that some unit creation is attributable to this trade, it is not riskless if premium at expiration is less than borrow cost, so this requires a view/willingness to take risk that future demand outstrips current supply of GBTC resulting in a future positive premium to NAV. This trade is also limited to more sophisticated investors given size and structure requirements. We’re also assuming future unit creation to be 15% which  is well under the current pace. Charles Swhwab highlighted that GBTC is a top holding w/in millennial 401ks. This is not generally reflective of short term speculation.

Counterpoint: I think it is important to look at the break out between “in-kind” and “cash”, but it’s likely that a majority of the “in-kind” unit creation was from institutions who brought BTC “for the purpose” of creating GBTC units. Per Grayscale’s Q1 report, 88% of unit creation in Q1 2020 was from “institutions”. There are very few institutions who are/were sitting on an inventory of BTC and then decided they would create units in Q2 2020. Given the mechanisms for unit creation, institutions are motivated to create units “in-kind”. If you create units with cash, you are leaving execution to Grayscale. Institutions will seek best execution and purchase themselves. Grayscale also has very specific instructions for wire transfers where you have to wire the money between 4:00 and 5:00 PM otherwise they send it back.  It’s because they have a 24hr window to buy the BTC (again - not good re: execution). This was a point that was brought up and depated in a twitter conversation here.

Critique: Bitcoin price is less now than it was previously, so demand is not as high in dollar terms.